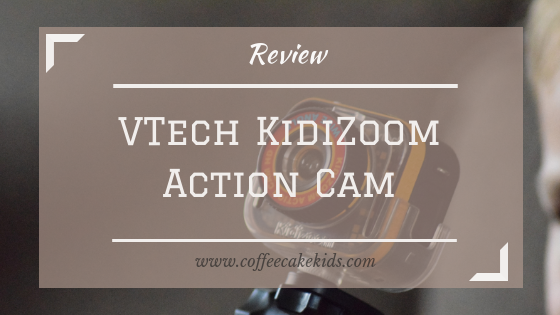 The three boys love taking photos just as much as I do. Every time I put my phone down, one of them is picking it up to use the camera to take photos of their little sister or make videos of each other doing some sort of trick on their bike. It was definitely time to look at getting them something that they could use without me worrying about them dropping and breaking, which is where the VTech KidiZoom Action Cam comes in.

We are big fans of VTech in this house, having had various things over the years. They’re durable and stand up to the test of three clumsy and boisterous boys, and this camera is no exception. It’s been out in the park, to the beach, and still lives to tell the tale!

The VTech KidiZoom Action Cam is a video and photo camera designed for active kids aged around 4 to 9. It comes with a variety of attachments so they can use it on a bike, skateboard or helmet. It even includes a waterproof case so kids can take photos and videos in the pool, in the sea or on a rainy day.

The camera comes with full instructions, but to be honest, it’s so simple to use that even Ben worked it out straight away and just discovered and explored the different settings and functions as they went along, such as the photo frame effects and games that can be played on the camera.

The camera doesn’t require any batteries and instead is charged by the USB cable that is included – you also use this to upload and transfer photos to the computer.

Now, you are never going to get super high-res photos from a device such as this, but do you know what? They ain’t bad at all. They’re certainly good enough for taking slightly disturbing close-ups of nostrils and eyeballs, filming stunts on their bike in the park and their many wannabe YouTube videos!

The camera does have a very small amount of built-in storage, but to be honest, unless they delete almost everything immediately after taking it/filming it, you’ll want to purchase a micro SD card for it.

All in all, we were pretty impressed with the camera and the kids have had lots of fun with it. They’re super eager to take it to the beach and take some under-the-sea photos and videos with it at some point in the future, and they’ve started asking me if they can upload their videos to YouTube – watch this space!

The VTech KiddiZoom Action Cam costs around £40 and is available from Amazon and all good toy retailers.

*We were sent this product free of charge for the purpose of this review. All words and thoughts are our own and have not been influenced in any way.