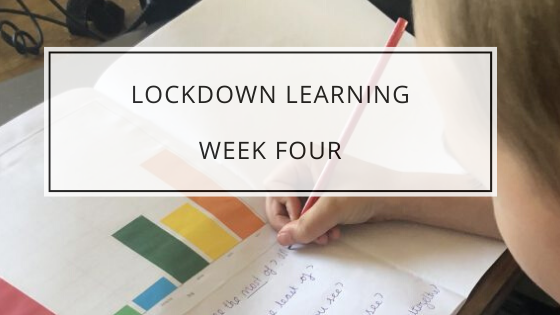 This is actually week five, but I didn’t do a post last week. It was the Easter holidays so I wasn’t worrying too much, and we also had a week where we didn’t do a lot, so it would have been a pretty dull post!

This week, we have been back on it, albeit taking it slowly. After a relaxed couple of weeks, we wanted to ease back into it, and Graham had a few days off, so it was nice to have him around.

The kid’s schools have been sending some work home for the kids and are more organized now. Like everyone, they were thrown into it to start with and I can’t imagine how hard it was to set work for kids, not knowing who had access to what or how long we would be off for. I think they did amazingly, all things considered, but it is nice to have some more structured things for them to do from school.

We have been on lots of walks around our neighbourhood, looking for signs of spring and rainbows. We have also been for a walk around the Marine Lake and a walk over to the beach – having a brief change of scenery really lifted our spirits!

We’ve also done lots of painting. The boys painted each other’s feet and stood on a piece of paper on which I wrote ‘These Little Piggies Stayed At Home’ to keep in our Lockdown scrapbook. Elizabeth also joined in, and she did some painting of her own this week.