Giving in to the Fidget Spinner Fad - Coffee, Cake, Kids
Skip to content

Between me and my two younger brothers, I’m sure we went through every playground fad and ‘must have’ toy of the 90’s and 00’s, driving my parents insane.

We’ve pretty much avoided every single fad so far, which is pretty good going considering we have two boys at primary school. Both of them are quite young and innocent for their age – they don’t have any games consoles, they both still very much like playing with toys, playing shops, mummies and daddies and schools, and I’m sure that neither of them has a clue what Minecraft is (just asked them – they don’t!). They’ve never shown any interest in any of the fads, preferring to do their own thing.

Until now. All I have heard over the last couple of weeks is are:  ‘Mom, can we have a fidget spinner?’ ‘Mom, we really want fidget spinners’.

I was in two minds over letting them have one. On one hand, I don’t want them to be the only kids without them and feel left out, but on the other hand, I think it is important for them to know that they don’t have to be sheep, and just because everyone else has one doesn’t mean they have to. The fact that the fidget spinners were designed to help children with additional needs made it even harder. From working with children with SEN and using these well before they became so popular, I know how important and useful they are. With almost every child having one at the moment, I can’t help but worry that it is almost minimising that and turning a useful learning aid into something a bit naff. Lots of schools, including ours, are banning them. Whilst I absolutely agree with this, it also means that the children with a real need for them are losing out. 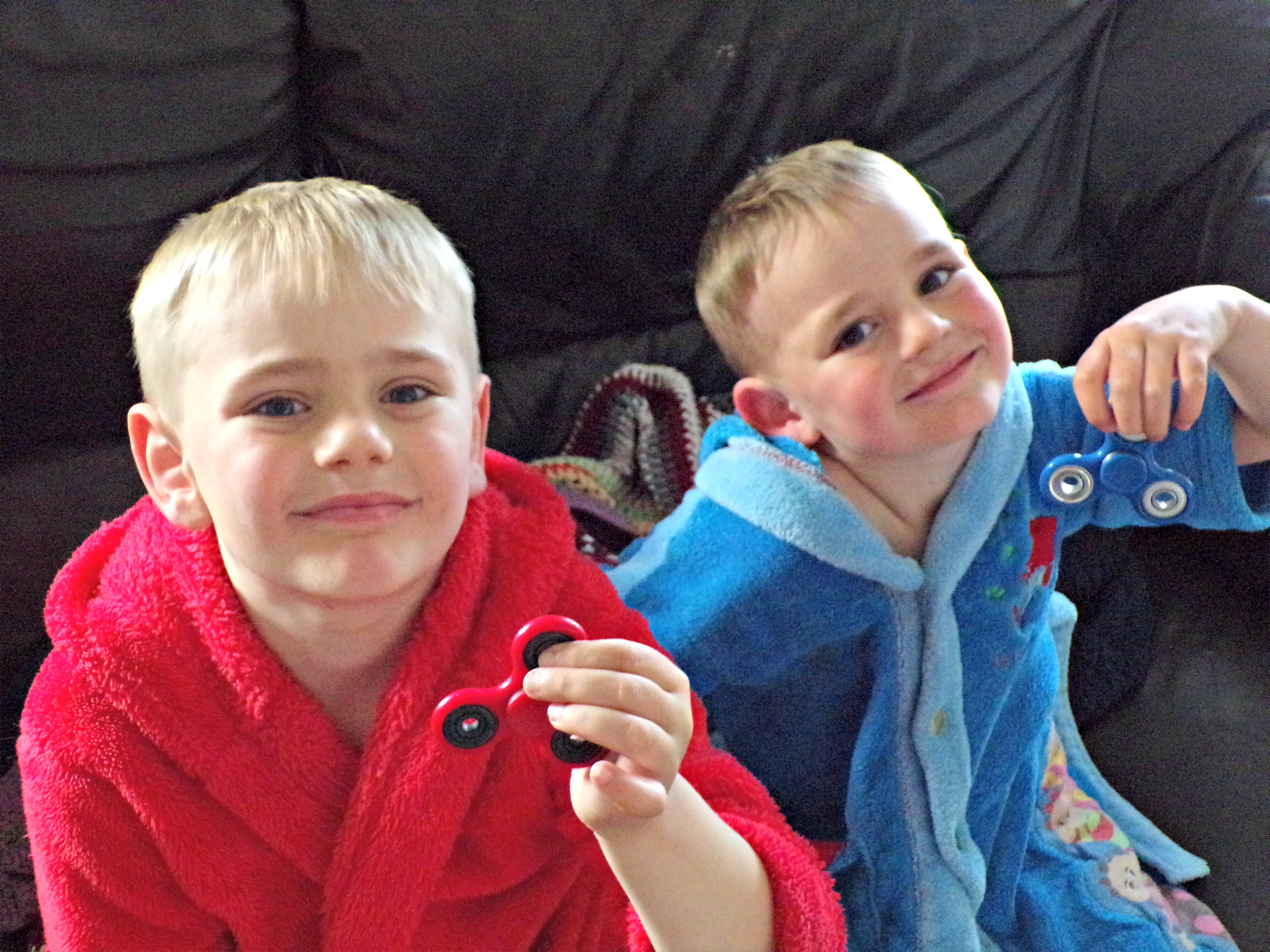 It still didn’t stop me caving in today and letting them have one. I felt a little bit sad letting them have one because it was almost a sign that they are growing up and that peer pressure is going to start being a thing, but I suppose it was always going to happen. They’ve been playing with them on and off all afternoon, so I although I took them off them whilst they watched a film – they aren’t natural fidgeters and I didn’t want to encourage them to start fidgeting because of a plastic spinning thing, a view shared by Ayse from Arepops. 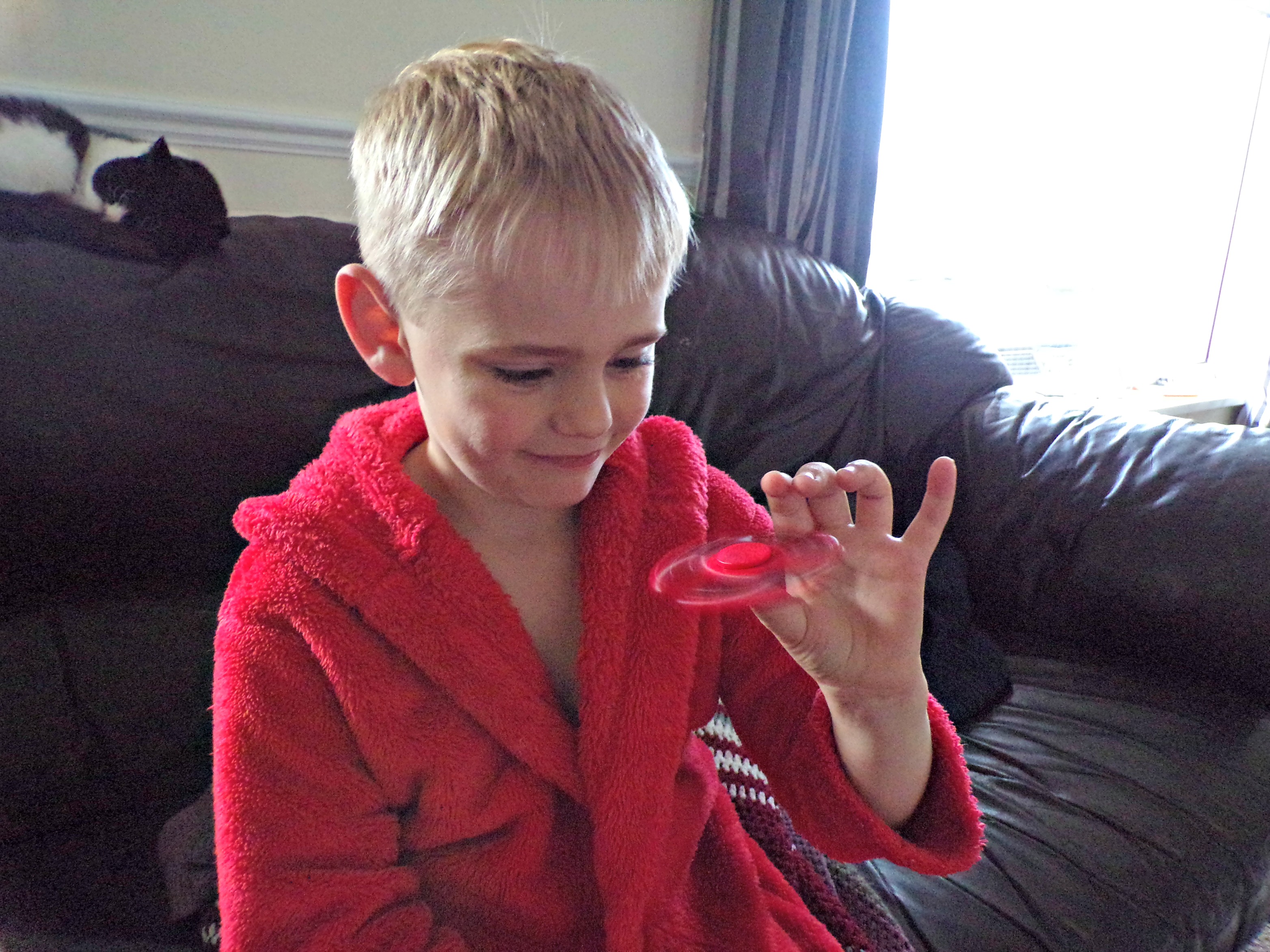 I asked fellow bloggers what they thought of the fad, and the response was quite varied. Beth from Life as Mum thinks they’re ok, although her girls don’t have one. She agrees that they shouldn’t be taken into schools as no other toys are allowed in schools (good point!). Clare from Emmy’s Mummy also bought two today for her children and hasn’t got a problem with them – she plays with it herself! Again, she agrees that they are something that shouldn’t be taken into school, something which I think most of us are in agreement about. Jaymee from The Mum Diaries hasn’t bought into the fad, but hopes that even though most schools have banned them, children who really do need them can still use them. Jennifer from My Mummies Pennies thinks they are great for long journeys and theme park queues – maybe, just maybe, they will stop Harrison and Alex from wanting to kill each other on our way back to Birmingham next weekend! Beth from Twinderelmo has bought one for her son, but (like me!) doesn’t quite see the attraction with them. Clare from Neon Rainbow Blog has them for her two boys. Her older son doesn’t need one but wanted one to fit in, but her youngest is one of the children who possibly would benefit from them – but isn’t interested at all! She doesn’t think there is any harm in them either way.

With more and more schools banning them, and a half term holiday looming, I’m guessing that the fad for these spinners is probably going to die out quite shortly and there will be something else driving parents and teachers crazy across the country.

If you fancy trying out a fidget spinner for yourself, Simply E Liquid are giving away a free fidget spinner to everyone who signs up to their website. To get your hands on yours, simply click the image below, which will take you to the sign-up page.

4 thoughts on “Giving in to the Fidget Spinner Fad”