Get To F**k With Your Football Snobbery -
Skip to content 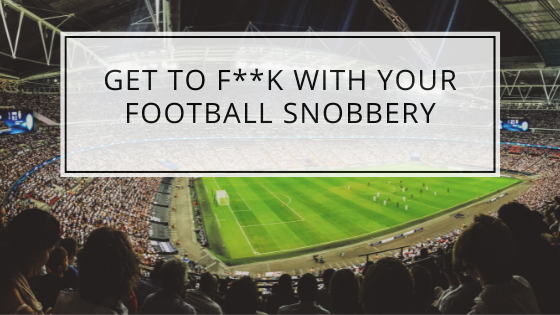 I ended up having to unfollow the post because it got me more than a little wound up.

The question that was asked in the original post was:

Controversial Post!!!!! Is there anyone else out there who simply does not get the whole football thing? It is almost every news story/tv programme and I’ve seen people getting negative comments for cheering on a different country. Surely it’s only a game, I just dont understand the attraction (just my opinion of course and nothing against anyone who enjoys it) 🤔

Nothing inherently bad about that. She acknowledged that other people have different opinions. The comments were a mix, and many were controversial.

There were three main camps:

2. Not a fan but happy for the team and people who enjoy it

I’ll give you a moment to guess which group was the most aggressive and judgemental.

Yep; the I hate football camp.

Ironically, while moaning about people judging them for not liking football (no one was, tbf!), they were calling it ‘mob mentality ‘football louts’, ‘aggressive’, and my (not so) favourite: a bunch of overpaid ego heads.

The snobbery surrounding football from these women was unreal.

I challenged the woman who called them ego heads, asking her what she based that assumption on. I was polite, of course. She wouldn’t answer. Instead, she called me judgemental and said that I proved that football is egotistical. How that works, I have no idea. I wasn’t the one judging hundreds of young men, most of which are from very ordinary working-class and ethnically diverse backgrounds and have worked their way up from being a kid kicking about a football in the street to being a young man representing their country.

Are there some egotistical yob footballers? I’m sure there are, as there definitely are yobbish fans.  But they really are a minority and you hear about them because they’re the minority. Look at our current England team – it’s a team of good, young lads who have done some amazing things for racism, homophobia, and various other good causes. Just look at Marcus Rashford (admittedly not playing in the World Cup but still a current top England footballer) and his campaign for feeding kids last year. After drafting this article, I read that should the team win the final, they are going to be donating their prize money to the NHS. These lads aren’t from posh backgrounds – most of them are normal, working-class boys, many of whom grew up on council estates with single mums who have played their hearts out and trained and probably sacrificed so much to do what they do.

Why can’t we celebrate this? To me, it’s smacks of snobbery.

Ok, they get paid a lot of money to do what they do. Yes, probably way too much, but let’s face it – would you turn down thousands of pounds a week to do something you love? To hell would I! They don’t just rock up ten minutes before a game and play kick about for 90 plus minutes. They train, they have their sponsorship activities and as we have seen recently, many do plenty of good for their communities. They’ve also probably sacrificed so much as kids as having their families, going to grassroots level games on a wet Sunday morning.

There was the argument that they get paid that sum of money while doctors and nurses and teachers don’t get paid anywhere near as much for saving lives. That’s very true and of course, these amazing professions deserve a massive pay rise. However, that’s something to take up with the government. It’s not the footballer’s fault.

Finally, there was just general sneering about the sport in general – it’s mind-numbing, what entertainment could be derived from watching men kick a bag of air about, etc. Ok, football is not everyone’s cup of tea, but there’s no need to piss on someone else’s chips for liking it and insinuate that they’re somewhat a lesser person for being a fan. I hate tennis – I think it is absolutely mind-numbing and would literally watch anything else. However, I know other people like it and guess what,? I can turn over the tv if I don’t want to watch it. Tennis, I suspect, is seen as a more middle-class sport to many of these women, played by a much nicer class of people – none of these young yobbish men.

It’s snobbery, and one thing I hate is snobbery.

Don’t even get me started on the woman who questioned why we were even allowed to play in the Euros as many people (not her, apparently) voted to leave the EU…

Get to fuck with the snobbery.

One thought on “Get To F**k With Your Football Snobbery”