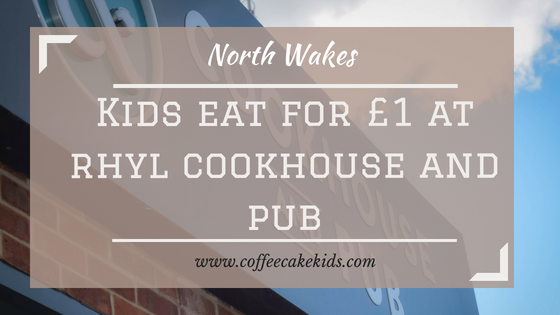 Eating out is a big treat for us. The boys love it – they generally eat really well in restaurants, and we love having a night off for cooking and washing up. We were really pleased earlier this year when Cookhouse & Pub opened up a brand new restaurant on Rhyl seafront. We went for a meal there and were really impressed (read the review here). We were pleased to be invited back last week (well, a couple of weeks ago, but those damn chickenpox!!) to take advantage of the new kids eat for £1 deal*. 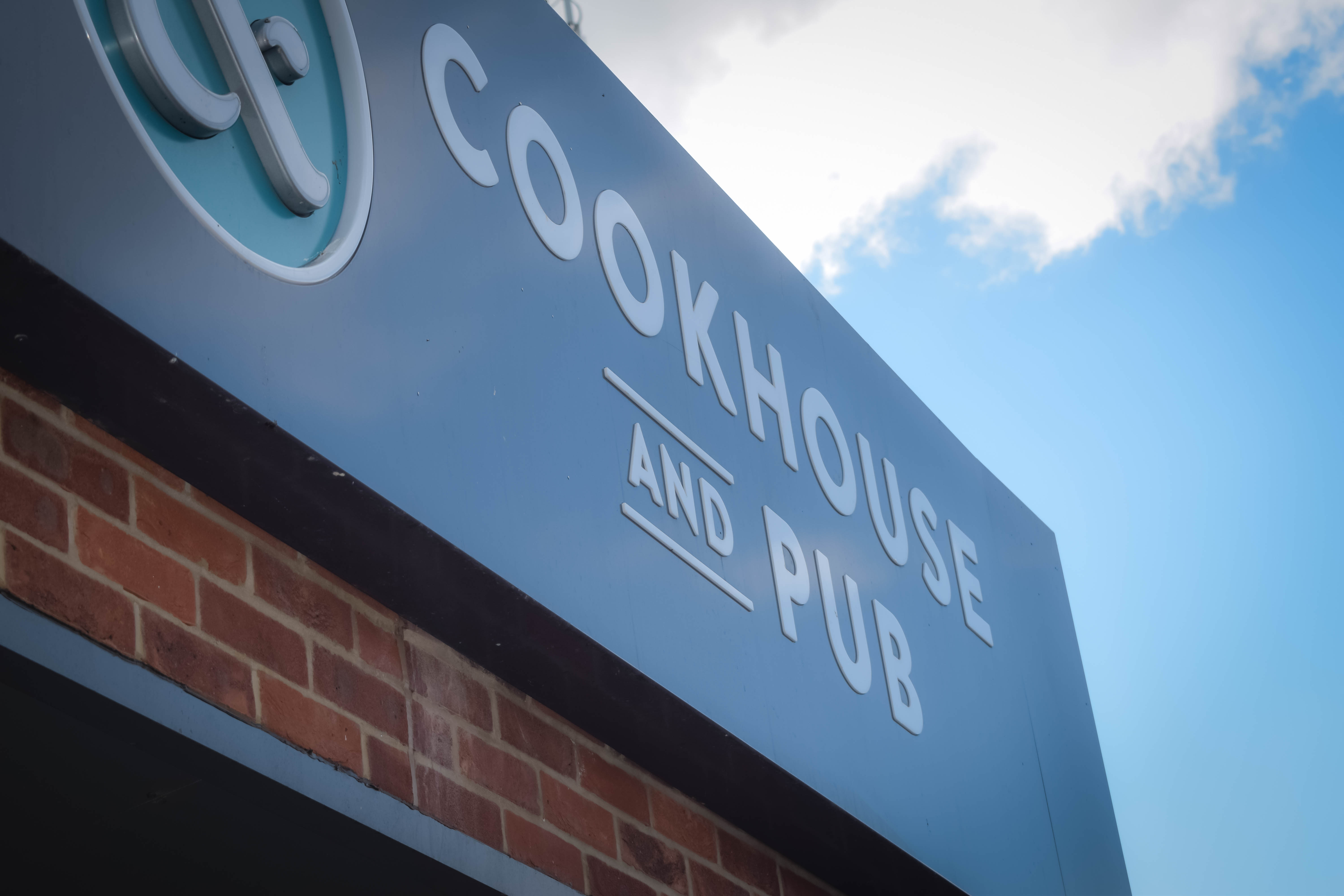 The deal, basically, is that with every adult main meal purchased between 3.30pm and 5.30pm, Monday to Thursday, children eat for £1. I think that’s a pretty good offer – not that the children’s meals at the Cookhouse & Pub are expensive, but when you have three kids, saving a few quid on a family meal is always going to be a good thing! 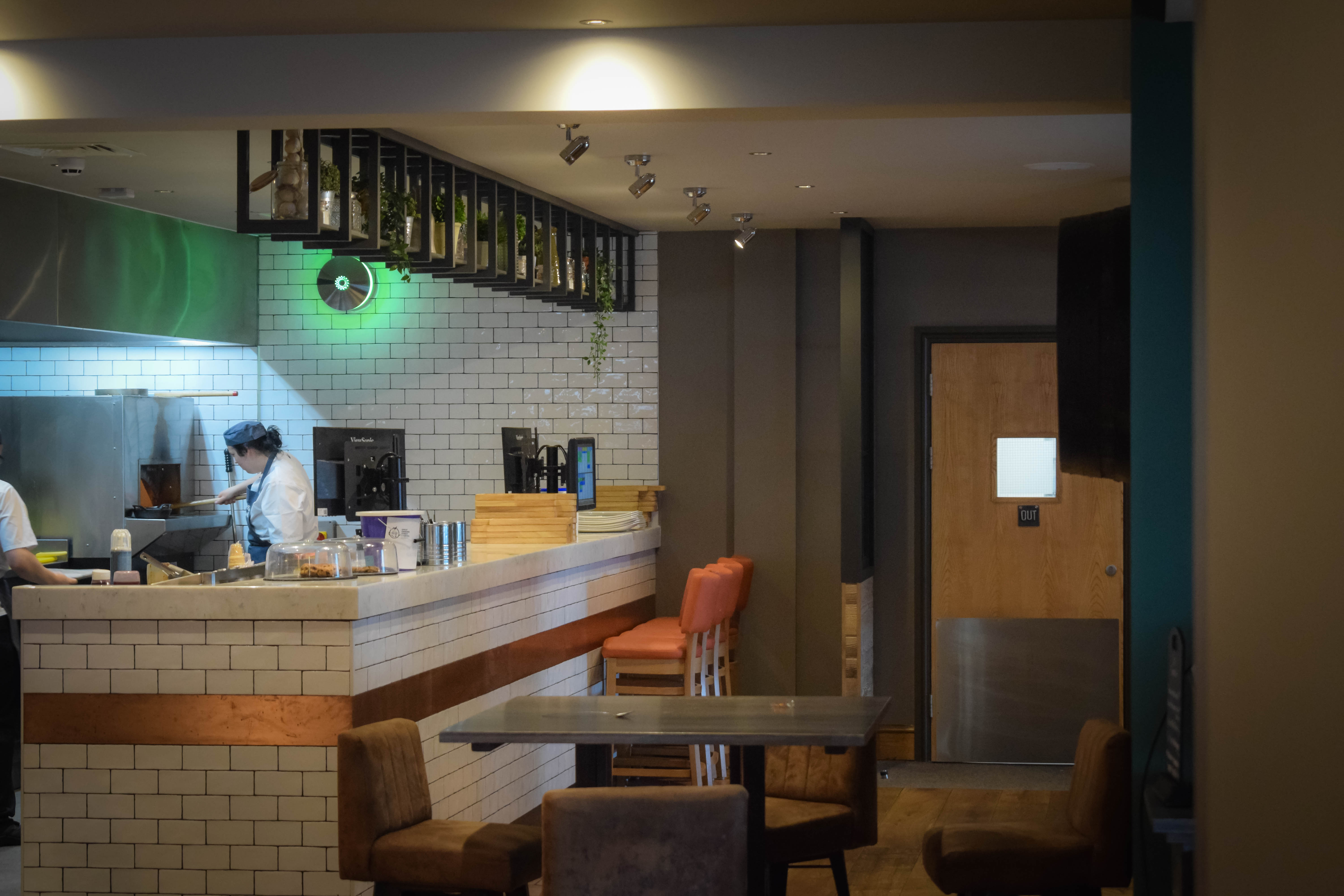 The restaurant is lovely and calming inside, and despite it being quite busy as it’s the height of the holiday season here in North Wales, it didn’t feel like we were sitting on top of other people. We were shown to our seats by the manager, who introduced us to our fantastic waiter.

We pondered the menu for a few minutes, whilst Lee bought us over our drinks – a glass of pop each for the kids, a lager for Graham and a bottle of very nice red wine for me. Not only that, we were given a big bottle of water and glasses, which I thought was a great touch. When I’m drinking wine, I quite often want a glass of water alongside it, and I always feel a bit daft asking. They had run out of the kids coloring sheets, but I can imagine how manic it can get in a tourist hotspot in the summer, but the kids were still given paper and crayons to amuse themselves whilst we waited.

There is plenty of choice on the menu, but not so much that it overwhelms you. With both the adults and the children’s meals, there is the chance to customise your meals a little – swap sides, and extras etc, meaning everyone will be happy.

I’d love to say we all tried something different from last time we were there, but we enjoyed it so much that Graham and I stuck to the same starters: prawn cocktail for me and pate for him. Graham said the pate was delicious – a decent sized wedge of it (good job really, as Alex took a liking to it!). It was served with brown bread and onion chutney. 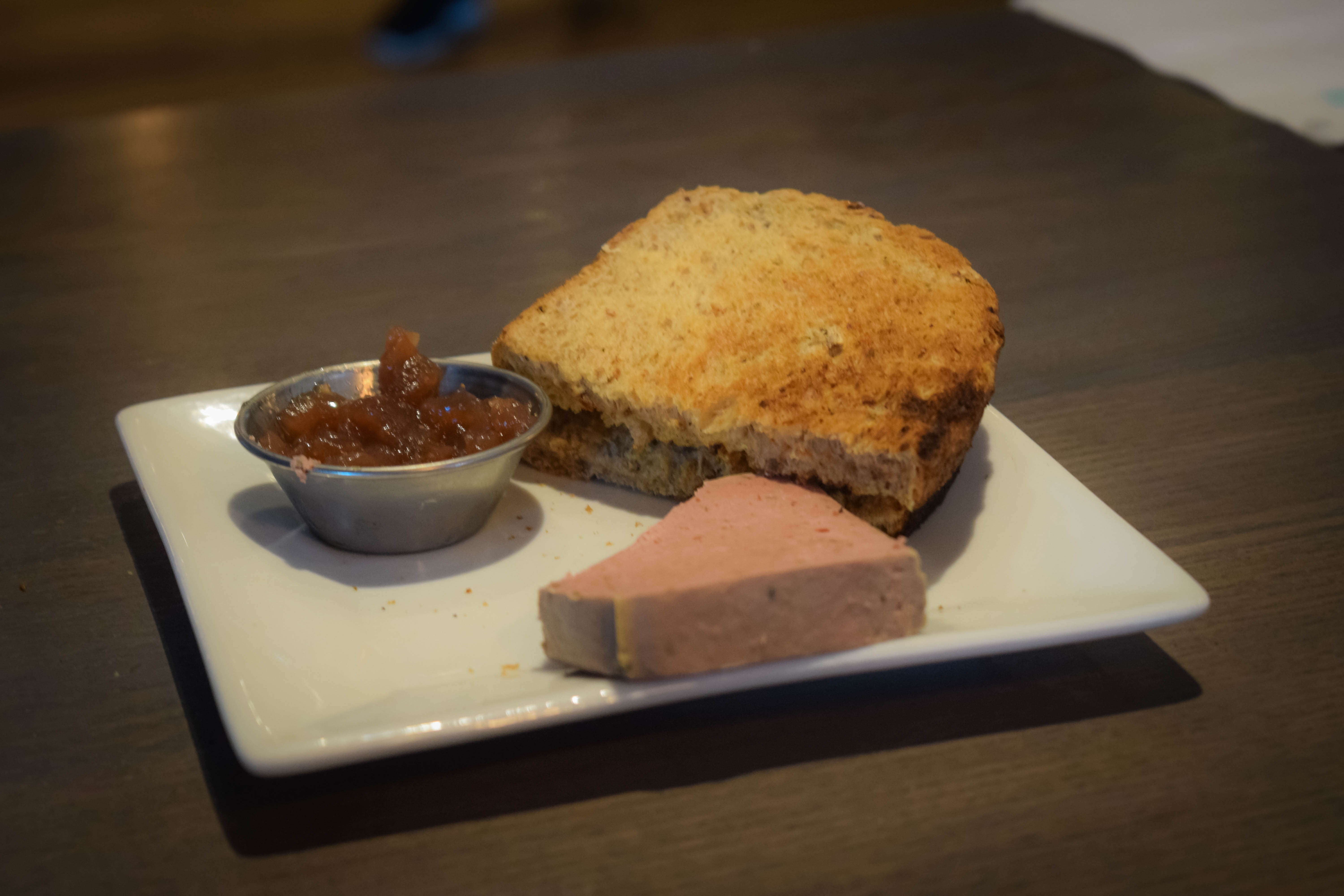 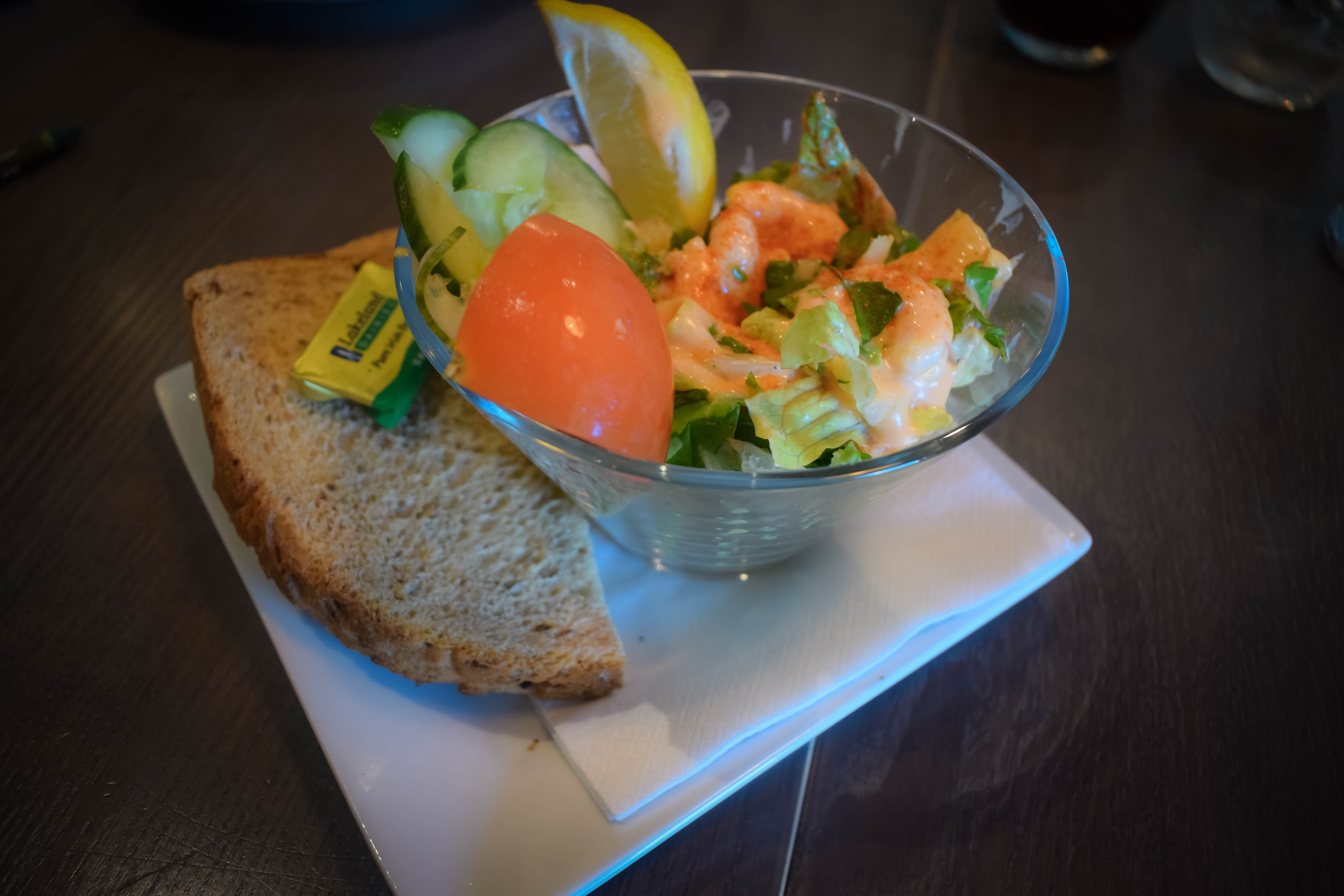 The boys all chose to have garlic bread, which came with cucumber sticks. There were three empty plates left at the end, which tells me it was a big hit!

For the main course, I went for the C&P Ultimate burger – again. It has two 4oz burgers, streaky bacon, cheese, aged cheese sauce, tobacco onions, pea shoots, fried mushrooms, baconnaise, topped with pickled cucumber. It came with fries – I could choose between sweet potato fries and ordinary fries – and a very generous helping of coleslaw. It was delicious!

Graham went for the ribeye steak – again. He also added battered prawns and peppercorn sauce to his meal, which also came with peas, tomatoes, onion rings and fries. He said that the steak was cooked to perfection. 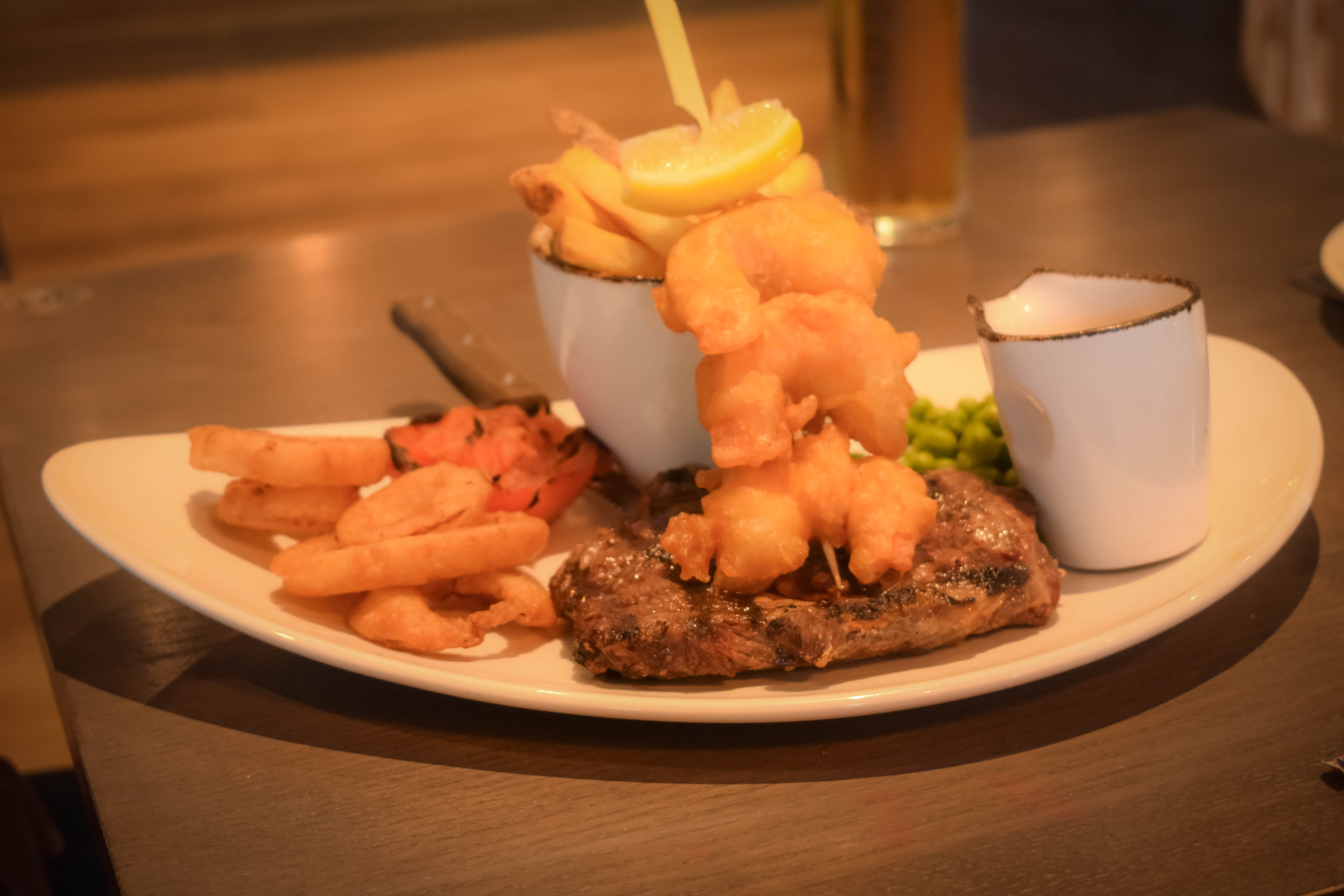 Harrison and Benjamin had the chicken meatballs with tomato pasta, which also came with garlic bread and veggie sticks. Judging by the state of Ben’s face and t-shirt at the end, he really enjoyed it, and there was a completely clear plate from Harrison. Alex opted for the burger and fries, with corn on the cob. He’s our fussy eater, but even he enjoyed it! 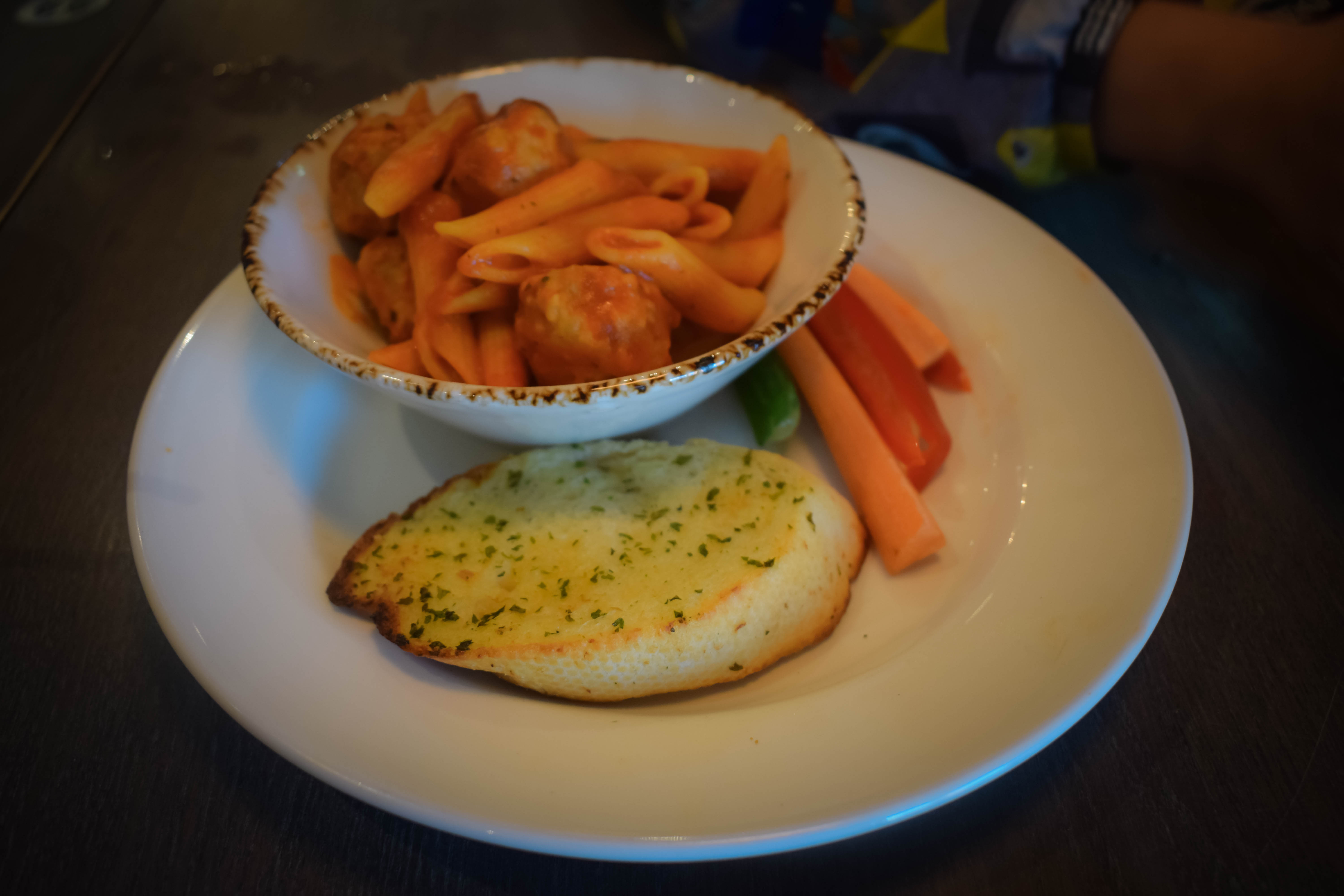 Dessert – the best bit. I’d had apple crumble last time, which was delicious, but I had drooled over Graham’s mud pie. I didn’t even have to think about what I wanted! It was as delicious as it looked! Graham had a salted caramel, brownie and popcorn sundae. 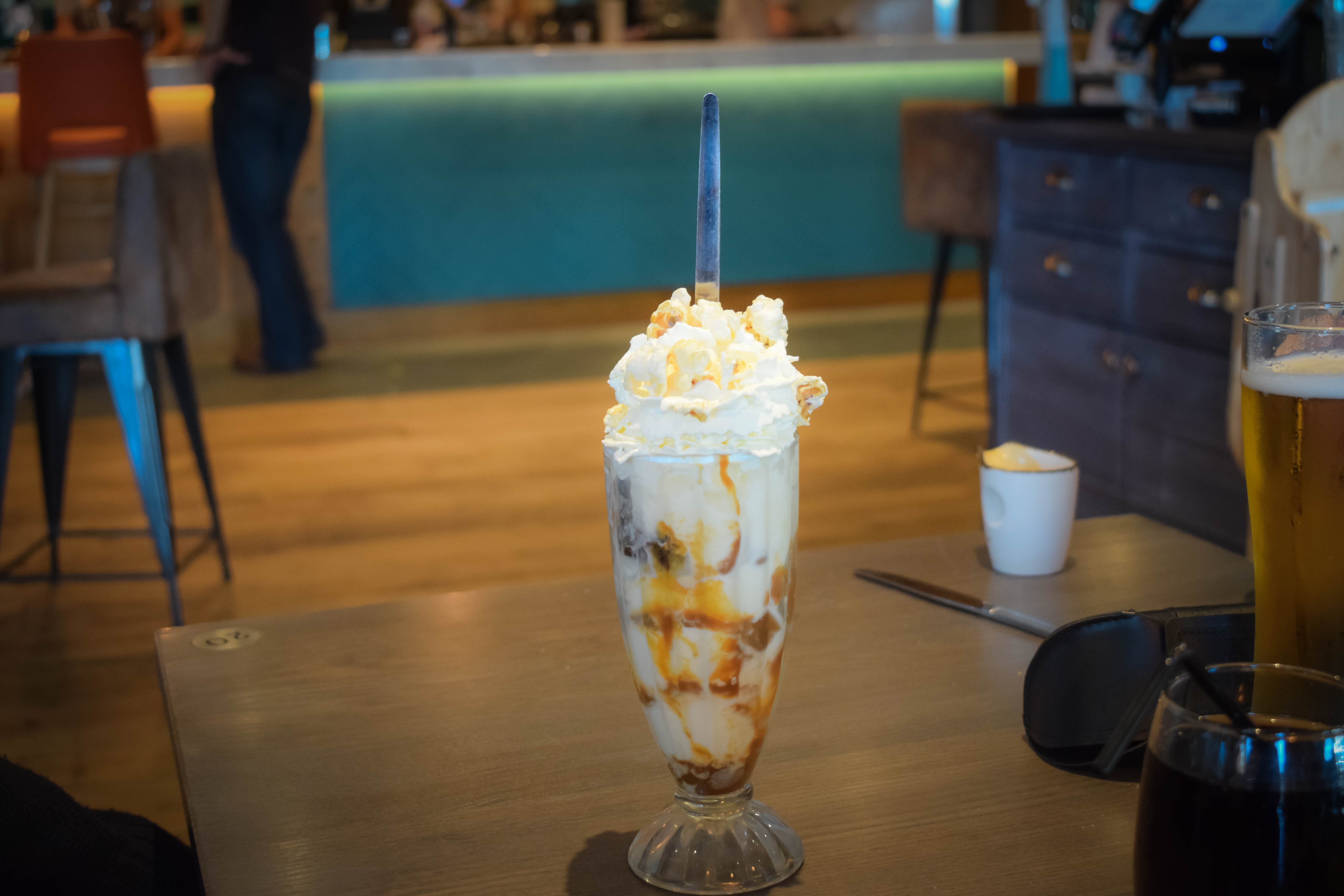 Lee invited the kids up to the food prep area (which was spotless, by the way!) for them to help put their own puddings together. I think this was a really nice touch – sometimes, by the dessert point of a meal, kids start getting a little bit restless and getting kids involved in making their own food is always a winner. Harrison had vanilla ice cream with a wafer and sauce, Alex had pancakes and Ben had the funny face sundae.

As before, the service was impeccable. Our waiter was attentive without being intrusive, we didn’t have to wait very long for anything, but most importantly, the food was great. It’s somewhere I always recommend to people who ask where is good to eat in Rhyl!

*The kids eat for £1 offer is two courses from the children’s menu available Monday to Thursday between 3:30pm – 5:30pm when an adult purchases a main meal from the main restaurant menu. Additional courses can be added for 75p.

*We were invited to the Rhyl Cookhouse & Pub free of charge to try out the kids eat for £1 deal. All thoughts and opinions are our own and have not been influenced in any way.